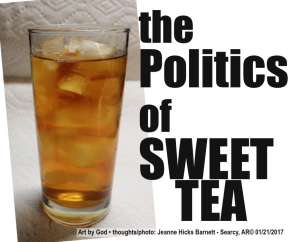 I live in the United States of America in a Southern state and I drink SWEET TEA and I really enjoy it—it’s the only way to drink tea!

Now I know that there are people out there who drink their tea unsweetened and there are even some who don’t drink tea at all—how sad!

So consider this . . . SWEET TEA supports the job market in many areas like sugar cane fields and the companies that process the sugar and the vendors who sell it and the ones who put it on the shelves in the stores—I feel really good about drinking SWEET TEA—it’s the right thing to do!

Of course, then there are those who drink their tea unsweetened, just plain tea, and I guess they could say they support the tea plantations, the companies that process the tea, the vendors who sell it, and the ones who put it on the shelves in the stores—yeah, that’s okay, I guess.

Then there are people who do not drink tea at all! Maybe they don’t care for the taste, maybe they have some sort of health issue that prevents them from drinking tea, or a religious belief that prohibits drinking tea, or some other reason, but they just don’t drink tea in any form—that’s a bummer!

That’s why living in the United States of America has always been different than other countries . . . the idea that each person should have the right to choose to drink SWEET TEA or unsweetened tea or no tea at all is a part of the basic “freedom” package.

SO . . . come on, folks . . . allowing each of us to choose how we drink our tea—SWEET TEA or unsweetened tea, or not at all—is what shows that we are willing to allow others to have the same freedom we want for ourselves.

I cannot demand a right for myself
that I am not willing to give to another.

Of course, trying to apply this concept to other subjects has proven to be almost impossible because of the intensity of emotions involved. Why?

Why can we not seem to be able to discuss issues with each other respectfully and with a willingness to listen to the other person’s views without flying into “angry defense mode” AND how did we reach the point of having to make all others conform to our view while we do not even consider theirs or ridicule it?

—
Think about this . . . hypothetical case:
I own a sports arena and I love SWEET TEA, so I sell it to people who come there to watch the competition AND, because I sell so much, the vendor gives me a break on the price for the product meaning I can sell it for less than others around me.

Then, a friend of mine is diagnosed with diabetes and starts having to watch his sugar intake. He can’t buy my SWEET TEA and that leaves him with no other options, but he has adjusted to drinking unsweetened tea and asks me if I would consider stocking it so he could drink some tea when he came to the arena. Well, I want to help my friend, so I start selling both SWEET TEA and unsweet tea.

Then, I get acquainted with a man who comes to the arena a lot and I notice he is not drinking anything while he is there and some of those days were very hot. I asked him about that and he said that he belongs to a group who believe it is sinful to drink tea of any kind because it harms the body. Well, I had never heard of that, so I gave it some thought and decided to ask him what he could drink and I would add that to my menu.

Things were really going along fine and everybody was able to enjoy drinking something during their visits to the arena . . . but, then someone came to me and said, “What are you doing wasting your money carrying all these drinks besides SWEET TEA? You know it is the most popular with most folks and you don’t have to carry those other drinks—it’s a waste of your money.”

So, I thought about it and he was right, but there were other things to consider, like my friend who had to restrict his sugar and my friend who had a religious conviction against tea, so I answered my objecting friend by explaining about consideration for the others and his response was quick: “So, are you going to let others tell you what to do? Are you going to waste your money for just a few people who probably don’t even spend that much with you? Do what YOU like—SWEET TEA and forget all that other stuff!”