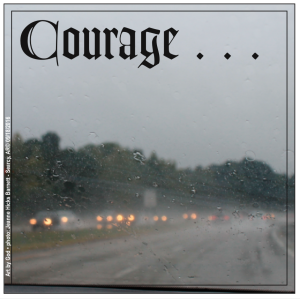 Courage . . .
has as many different expressions as there are people in the world.

What, for you, might be an easy task would require a great deal of courage for someone else.

We don’t often stop to consider that in our judgement of people and that’s sad. All of the things we are “supposed to do” and “supposed to be” are based on someone else’s ideas. They often don’t take into account an individual’s experiences at all.

For instance—driving in the rain would seem a simple enough task. One requiring, perhaps, just a little more caution than normal . . . but, for me, it takes courage. Each time I do it, a picture flashes in my brain of my car crushed up again a concrete bridge, a picture of that helpless feeling, of spinning and not being able to stop. Each time I drive in the rain, the pictures get a little dimmer and it takes a little less courage on my part. Eventually, I may overcome it completely; but, for now, I still have to push myself to drive in the rain.

So, a task most people don’t even think about, is difficult for me. I don’t think that makes me crazy or weak or unintelligent. An experience that was mine alone made this task one that requires courage for me to deal with each time.

It’s so easy for people to stand back and ask why I can’t deal with something the way they think I should. If they had lived through my experiences, they would know that I display my courage daily. They would see how some “small” act to them is something I have to push myself to do because of my experiences.

Courage becomes a clearer word
when you realize that we use it to fight being human.
Courage is what it takes to live . . . every day . . .
but, it is different for every person.

Maybe that’s why sometimes we don’t show the understanding we should to someone. If that person doesn’t let you know his/her experiences and what requires courage on his/her part, then you can’t give support where it is needed. By the same token, if we are so quick to to give judgement, others will not feel that they can share their burden with us. This causes frustration for you as well as the other person.

Remember:
the only thing that makes your problem worse than mine is that it’s yours . . .
and it takes courage for me to face my challenges because the experiences are mine!