Seeking the Way: —nihilism to suicide – 27 years (part one) 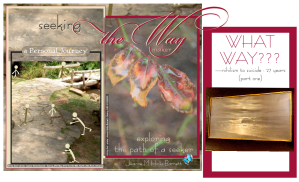 ONE WAY:
So now comes a time that is hard to review and I will not go into much detail because it does not serve the purpose of my overview about my “seeking the Way” except from the perspective of how the “events’ of this time more completely changed my idea of God, His nature, even His existence and how it all played a part in my choices.

So, here is a summary of my life that I would call:
tidal waves, oceans, and moonlight
(traumatic events, deep waters, and small points of light in the darkness)

My childhood had entrenched in me very strong perfectionist tendencies and my “failures” were magnified by the religious teachings that required perfect adherence to literally-interpreted Judeo-Christian scriptures and “second chances” were almost unheard of for any reason. Therefore, not being able to live up to the requirements meant being lost forever as judgement would send me to hell for eternal punishment for my life choices.

I was baptized three (3) times that I remember and it may have been a time or two more—that was because I was taught baptism was the only way to “get clean” and I could claim any previous commitment was without proper understanding so they didn’t count which put me back as an “alien sinner,” (one never baptized). I could get full pardon as an “alien sinner,” but as a “baptized Christian,” I would have to accept the penality for my “sins.” So I had to claim I wasn’t baptized the previous times for the right reason or understanding.

This series of attempts to “get clean” added to my guilt because I believed I was using and abusing that system to attain the impossible state of forgiveness for what I believed was unforgiveable—willful sin, sins chosen knowing they were wrong choices, and enjoying the sin and not wanting to stop the sin, just repent to avoid punishment.

A PICTURE, AN OCEAN—there was, and still is, a picture in my mom’s house of the ocean on a cloudy, moonlit night. I still look at that picture and think of my life spent trying to make sense of the “ocean” – trying to swim in deep water knowing I was in way over my head and eventually giving in to the realization that it was hopeless . . . my life was hopeless, I was hopeless. Nobody cared. Nothing made any sense!

Before reaching that hopeless final decision, I spent years searching for answers in many places. I rejected my childhood religious beliefs after being verbally berated by the wife of a leader in the church I was attending for not having the reason for my divorce actually put on the court decree as “adultery” (the only acceptable “scriptural” grounds according to that church). At such a young age, I walked out of that church shattered in heart and broken in spirit and swore to never return to any group that could inflict such pain on any person.

NEXT—A NEW AGE: as a young adult seeking for answers to life, its meaning, and how to live it, I was attracted to the New Age Foundation by a friend. I attended a recruiting event in a large auditorium that was filled with other young seekers and much enthusiasm. The basic platform was presented by a charismatic speaker who “sold” it as a simple, almost miraculous answer to all the questions of life.

MOONLIGHT—The message I heard was: love and light offering a foretaste of the coming era through personal transformation and healing.
The way to rise above
the darkness of my past,
the emptiness of my present, and
the despair of my future—
an offer of hope that was compelling,
food for a starving soul,
light to guide a seeker . . .

For the first time, I felt hope that there was “more” to life than I had experienced and that looking within with the proper guidance would bring peace, enlightenment, the path to walk that would lead to the answers I had been seeking. It brought me back to what I had believed as a 7-year-old, that blind belief that there was more, that there was power to be accessed beyond myself and in myself, and that I could gain entrance into that by bonding with the right belief system with the right guide—I just had to find it.

So, my first stop in this part of my journey was Transcendental Meditation, a way to access what was beyond me and lead to a deeper, fuller life by drawing on the consciousness of the universe, connecting with the deeper consciousness within myself.

I attended an informational meeting at the home of a local practitioner to see if it was something I wanted to pursue and that meeting took me to places I would never have imagined or even believe existed.

next: Seeking the Way: —nihilism to suicide – 27 years (part two)