Am I a Pharisee? 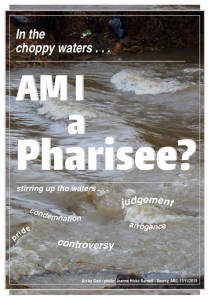 Most people would agree that today we are in “choppy waters”—lots of waves of unrest and insecurity, lots of chaos, lots of loud sounds of conflicting ideas, harsh voices shouting fears, deep divisions . . .
definitely, choppy waters.

I keep wondering why some others I see are acting in ways I don’t understand,
responding with over-the-top anger,
insults, judgements . . .
and I kept wondering til I came to,
who am I in all of this?

Since my background is heavily Judeo-Christian, my thoughts jump to the Bible and the well-worn slogan “what would Jesus do?” I wore as a bracelet for years. Jesus lived during a time of chaos and some then were rebelling against the current situations they perceived as
“evil” and oppressive.

The government was the Roman Empire with “figurehead” local leaders put in place to maintain pax Romana at all costs and the Jews had Herod, an Edomite, who was not considered a Jew but could be touted as one strictly speaking by the Romans.

The “governing body” to a certain degree was the priestly class who ruled on a limited basis with very little real power but could push the Romans to act with threats of disruption of peace among the Jews and, in some cases, it worked to get them what they wanted—the arrest of Jesus.

In my studies, I found no real criticism by Jesus of the Romans, but I did find a good amount of words he spoke against the scribes and Pharisees—religious leaders.

So, that seemed like a good place to start to review what I would NOT want to find within myself. I wanted to ask me the hard questions and find out if Jesus were here today, would HE say I was a Pharisee?

JESUS in Matthew 23 calls attention to the Pharisees
(1) holding positions of religious authority in the community,
• do I think I KNOW all God has said?
that I have THE truth infallibly? that I
understand and can explain God and
His actions? that I speak for God?

(2) concern for outward recognition and honor,
• do I want to be recognized and
appreciated for my contributions,
maybe even enjoying an occasional honor—do I feel slighted when I am
not recognized?

(3) enthusiasm for making converts,
• do I have an outward focus – believing
I have to make others adhere to
THE truth as a way of “converting” them
without intense SELF examination?

(4) emphasis on observing the legalistic minutia of the law.
• have I come to identify those who do
not agree with me on THE truth as “lost” and, therefore, my enemies? do I
believe my interpretations or those of someone I follow are THE truth—
NO exceptions?

Do I lack the compassion Jesus seemed to indicate the Pharisees lacked because, like them, I focus on a legalistic approach to THE truth . . . MY truth, MY way?

Am I a Pharisee?
Perhaps I need to think about these
questions a little more before I answer.