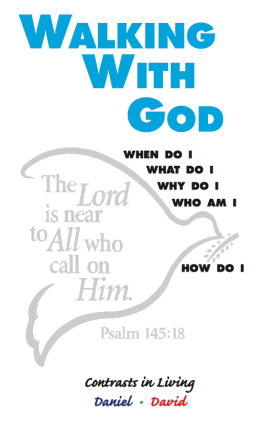 God has given us the life stories of individuals in the Scriptures for some clearly-stated reasons:
For whatever was written in earlier times was written for our instruction, that through perseverance and the encouragement of the Scriptures we might have hope. (Romans 15:4)
Now these things happened to them as an example, and they were written for our instruction, upon whom the ends of the ages have come. (1 Corinthians 10:11)
‘For I know the plans that I have for you,’ declares the LORD, ‘plans for welfare and not for calamity to give you a future and a hope. (Jeremiah 29:11)
Repeatedly God tells us that He wants to instruct us and that He wants to give us hope—the above verses are just a few.
With this in mind—two young men who started in humble or humiliating circum- stances and rose to greatness in their lives: Daniel and David.

THEIR EARLY YEARS WERE SPENT IN HUMBLE OR HUMILIATING CIRCUMSTANCES
Daniel: taken captive • slave status
In the third year of the reign of Jehoiakim king of Judah, Nebuchadnezzar king of Babylon came to Jerusalem and besieged it. . . . the king ordered Ashpenaz, the chief of his officials, to bring in some of the sons of Israel, including some of the royal family and of the nobles, youths in whom was no defect, who were good-looking, showing intelligence
in every {branch of} wisdom, endowed with understanding, and discerning knowledge, and who had ability for serving in the king’s court; and {he ordered him} to teach them the literature and language of the Chaldeans. (Daniel 1:1-4)
David: was the youngest • tended sheep

AS YOUNG MEN, THEY BOTH SEEMED TO HAVE HAD A RELATIONSHIP WITH GOD
Daniel:
And as for these four youths, God gave them knowledge and intelligence in every {branch of} literature and wisdom; Daniel even understood all {kinds of} visions and dreams. (Daniel 1:17)
David:
And David said, “The LORD who delivered me from the paw of the lion and from the paw of the bear, He will deliver me from the hand of this Philistine.” (1 Samuel 17:37)

DAVID & DANIEL BOTH EXPERIENCED MAJOR CHALLENGES WHERE GOD PROVED HIS FAITHFULNESS THROUGHOUT THEIR LIVES.
Daniel: his formula—see the problem, petition God, praise God
. . . the king became indignant and very furious, and gave orders to destroy all the wise men of Babylon . . . Then Daniel replied with discretion and discernment . . . and said to Arioch, the king’s commander, “For what reason is the decree from the king {so} urgent?” Then Arioch informed Daniel about the matter. So Daniel went in and requested of the king that he would give him time . . . Then Daniel went to his house and informed his friends, Hananiah, Mishael and Azariah, about the matter, in order
that they might request compassion from the God of heaven concerning this mystery, so that Daniel and his friends might not be destroyed with the rest of the wise men of Babylon. Then the mystery was revealed to Daniel in a night vision. Then Daniel blessed the God of heaven; Daniel answered and said, Let the name of God be blessed forever and ever, For wisdom and power belong to Him. (Daniel 2:12-20 excerpted).
David: his formula—see the problem, recount God’s acts, act
And David said, “The LORD who delivered me from the paw of the lion and from the paw of the bear, He will deliver me from the hand of this Philistine.” . . . . Then David said to the Philistine, “You come to me with a sword, a spear, and a javelin, but I come to you in the name of the LORD of hosts, the God of the armies of Israel, whom you have taunted. (1Sam. 17:37-45excerpted) 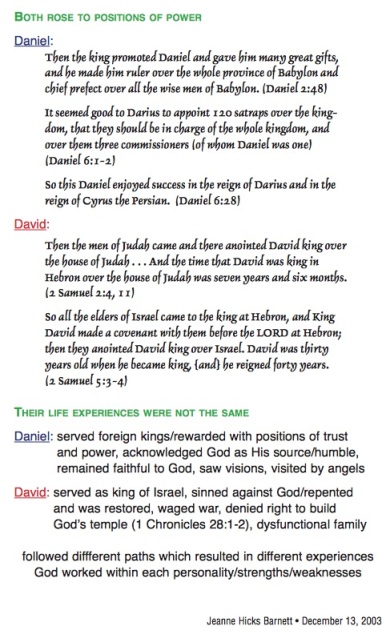 BOTH ROSE TO POSITIONS OF POWER
Daniel:
Then the king promoted Daniel and gave him many great gifts, and he made him ruler over the whole province of Babylon and chief prefect over all the wise men of Babylon. (Daniel 2:48)
It seemed good to Darius to appoint 120 satraps over the king- dom, that they should be in charge of the whole kingdom, and over them three commissioners (of whom Daniel was one) (Daniel 6:1-2)
So this Daniel enjoyed success in the reign of Darius and in the reign of Cyrus the Persian. (Daniel 6:28)
David:
Then the men of Judah came and there anointed David king over the house of Judah . . . And the time that David was king in Hebron over the house of Judah was seven years and six months. (2 Samuel 2:4, 11)
So all the elders of Israel came to the king at Hebron, and King David made a covenant with them before the LORD at Hebron; then they anointed David king over Israel. David was thirty years old when he became king, {and} he reigned forty years. (2 Samuel 5:3-4)

THEIR LIFE EXPERIENCES WERE NOT THE SAME
Daniel: served foreign kings/rewarded with positions of trust and power, acknowledged God as His source/humble, remained faithful to God,                     saw visions, visited by angels
David: served as king of Israel, sinned against God/repented and was restored, waged war, denied right to build God’s temple (1 Chronicles 28:1-2), dysfunctional family
followed different paths which resulted in different experiences
God worked within each personality/strengths/weaknesses
WALKING WITH GOD . . .
WHEN DO I . . . WHAT DO I
WHY DO I . . . WHO AM I
HOW DO I
     Jeanne Hicks Barnett • December 13, 2003