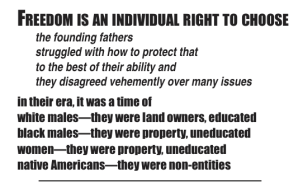 FREEDOM — free to choose
does not mean endorsement of
someone else’s choice IT IS just their right
to make the choice for themselves
FREEDOM IS AN INDIVIDUAL’S RIGHT TO CHOOSE
the founding fathers
struggled with how to protect that
to the best of their ability and
they disagreed vehemently over many issues
in their era, it was a time of
• white males—they were land owners, educated
• black males—they were property, uneducated
• women—they were property, uneducated
• native Americans—they were non-entities

FIRST: the question is
what is YOUR definition of “freedom”?
• does it mean my right to define what choices others make so that they line up with my belief system?
• do I demand the right to dictate what choices others make that I strongly disagree with?
or
• does it mean, like God, leaving people to be “free-will agents” who may make choices that do not line up with my belief system?

SECOND: the question is
how does freedom play out in SHARED areas?
• should I look at “freedom” in shared areas from a different perspective?
example: shooting fireworks in my backyard versus shooting fireworks in a crowd with no restrictions
• does “my rights end where your nose begins” apply in our shared spaces?

(remember WASPs?  — I grew up “knowing” the “ruling class” was                                  White Anglo-Saxon Protestants (WASPs) are a social group of wealthy and well-connected white Americans, of Protestant and predominantly British ancestry, who trace their ancestry to the American colonial period.  Until at least the 1960s, this group has dominated American society and culture and dominated in the leadership of the Whig and Republican parties.)